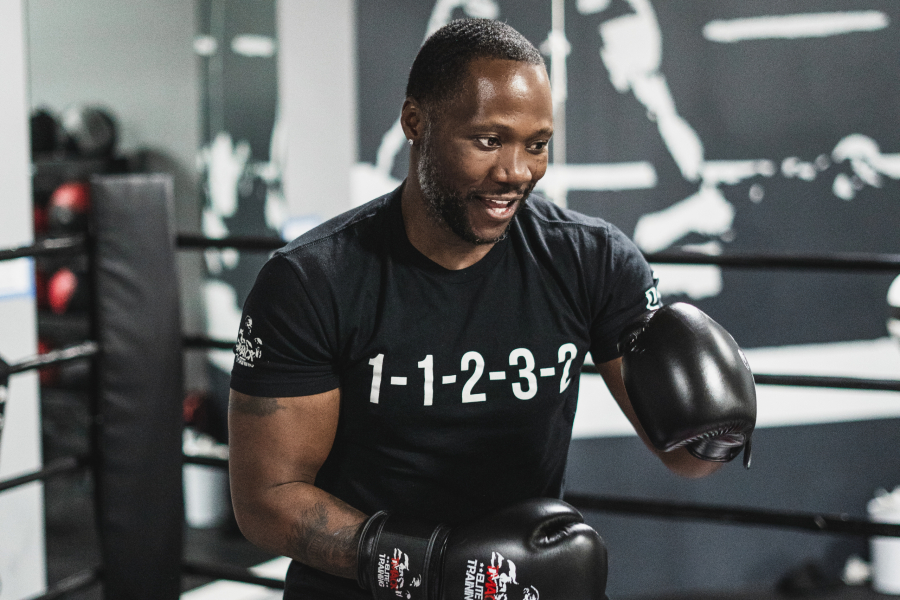 One of the hardest things in the lives of professional athletes is saying goodbye to their sports career. Sooner or later, this moment comes for everybody and it is never easy to handle the transition.

Unfortunately, for many athletes injuries are the reason  to end their career even sooner than they expected.

Leaving the game you love unexpectedly could be really heartbreaking and traumatic. One day you are great at something and you identify yourself with this greatness. You have goals, dreams, and plans for the future. The next  day, you cannot do this sport anymore because your body says no. How do you move on with your life from that?

Tony had a notable career in boxing. He was awarded a bronze medal in the USA Boxing National Championship, became  five times Dallas Golden Glove Champion and three times Texas State Champion. Tony turned pro at the age of 27 and soon after the good start in the league he had to leave boxing for good, due to a recurring injury with his eye.

In a short period of time, he had to find a new purpose in his life and go through five eye surgeries. During the interview with Yuri, they talked about the rehab process, the importance of mental toughness, and the transition from a fighter in the ring to a coach and fighter in life.

Here are some of the main aspects of their conversation.

Y.D: So, you started boxing at the age of 20, which is late compared to other boxers. What really drove you to boxing? How did you get into that?

T.M: I really wanted to be an athlete, but I’ve always felt unathletic. For example,  I thought I was unathletic to play football and not coordinated enough to play basketball.  But once I was introduced to boxing by one of my college roommates, it felt right.

The gym was an old school boxing place called PFC. Surprisingly, I managed to complete the whole workout and it was one of the best work I’ve ever had. I struggled but the coach said to me: “Man, if you keep this up, you can be a boxer.”

Since then, I’ve never missed a day of training.

Y.D: This is amazing. Sometimes people have the talent, but they are not willing to put in the hard work to go to the next level. So, hard work pays off for the most part.

T.M: It was a lot of hard work, a lot of uncertainties, a lot of blood, sweat and tears. I persevered because I didn’t want to be labeled a quitter, and I loved the self-esteem that boxing gave me. Growing up I was a chubby little kid and I struggled with gaining confidence. Thanks to boxing, people started looking at me differently and with more respect.

Y.D: This is great. Sports can be such a powerful self-esteem booster.

Tell us a bit more about your eye problem. I’m assuming that it was because of boxing. Is that correct?

T.M: The doctors said it was going to happen when I got older because of genetics, but  my profession triggered it off sooner. It didn’t come from that one punch it came over the years of boxing.

Y.D: You made the transition from a fighter to a boxing coach at Hidden Gym. You train amateurs, professionals and also enthusiastic people, who just want to get in shape. What is your motivation as a coach to know how to handle each client?

T.M: I treat everyone the same.  I treat every client like they’re my professional fighters. I invest the same energy in everybody.

I understand that not everyone is  willing to do whatever it takes as an amateur to get to the professional level. I’m aware of that but my energy is still  towards everybody.

Y.D: What are some of the attributes that you see with successful amateurs and professionals? Is it more talent, more hard work, or a combination of both?

T.M: Talent matters but it plays a less significant role. Only the most dedicated people do what it takes to be successful. Some of the amateur fighters in my gym are willing to run through a brick wall to be successful and those are the students that I really love to coach.

Y.D: Sometimes fighters have the physical strength and great cardio conditioning, but they lack  the mental toughness. How do you work with them on that aspect?

T.M: The mental toughness is 80% of the fight game. If you’re not mentally strong, you will not be successful. You must be tough enough to take a punch. You also must be mentally tough for everything related to boxing, such as losing and gaining weight, and eating right. I focus a lot on mental toughness.

I let my fighters know that I can’t want them to win as badly as they should want it. If I want it more than them, they shouldn’t be boxing.

Mental training is just as important as your physical training. Whenever a student of mine makes a mistake and becomes frustrated, I tell them to slow down. It’s all about learning and focusing on what’s next.

Y.D: I’ve seen some fights where it is obvious that the boxer is exhausted physically but he just doesn’t give up. The level of mental strength is gigantic and he continues to fight.

T.M: The fight in the ring represents all of the hard work the fighter had put in. Giving up on the fight would mean to give up on their work. This is what motivates the fighters during the fight to keep going, even when their bodies are exhausted, their minds continue.

Y.D: You’ve gained so much experience going through all those struggles. What would the more experienced Tony Mack say to the 20 year old Tony Mac right now?

T.M: Sacrifice a bit more.I never missed a workout but I remember partying until three in the morning, sleeping outside for two hours and showing up for training at  5 am.  I was trying to live a young life at the same time I was putting in work. I wish I was more disciplined and organized back then.

Do you want to listen to the whole podcast of Overcome? You can find the episode on Spotify, Apple, and YouTube!

If you want to learn more about Tony Mack or get in touch with him, check out his website, Instagram page, Facebook page , or come for a boxing workout at Hidden Gym.