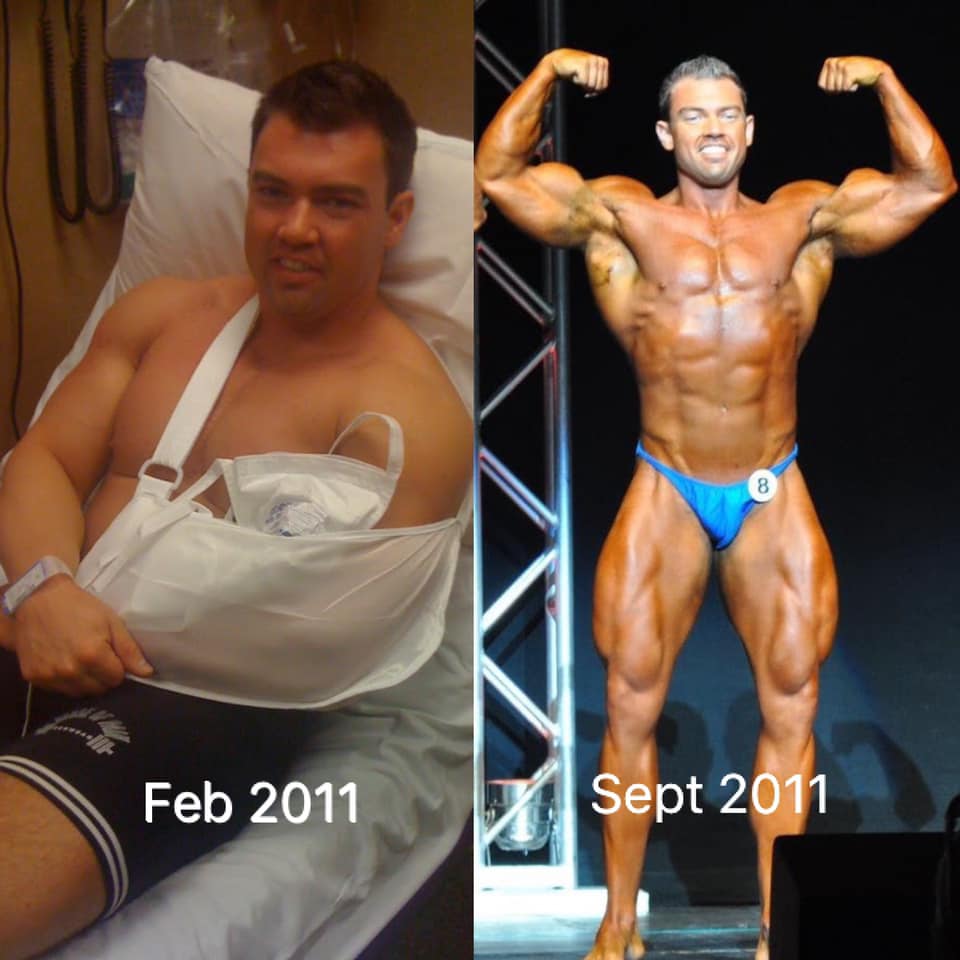 One of the most unpleasant things that almost every athlete faces at some point is injuries.

The event of getting hurt, while performing your favorite sport, can be really traumatic and might  trigger thoughts of self-doubt and fear after the recovery.

However, athletes have a strong mindset and know how to stay humble and push through the hard times.

In the seventh episode of Overcome, Greg McCoy shares his story and journey back to the stage after a tough injury. Greg is a bodybuilder,  personal trainer, and gym owner  with over 12 years of experience in the fitness industry.

Greg and host Yuri Diogenes discuss the rehab process and the importance of mental strength. Here are some insightful parts of their conversation.

Y.D: When I first met you in 2010, you had torn your biceps performing deadlift at a powerlifting competition. Tell us a bit more about it.

G.M: I was taking part in the SPF Powerlifting Meet. A powerlifting meet consists of three lifts, a squat, a bench press, and a deadlift. You get three attempts at each lift. Whoever has the most weight added up from their best lifts, wins their weight class or their division.

After completing the squat and bench press, it was time for the deadlift. My first lift was 530 pounds, which was a PR for me at the time.

For the second deadlift attempt, my training Greg Koffler helped me prepare the bar. He upped my PR by 10 pounds.

When he told me that the bar was 540,  I got psyched up. The previous lift was already difficult, so I got nervous about this one. I gripped  the bar and about three quarters of the way up I felt a Velcro tearing sensation inside my bicep.

Y.D: I remember seeing those pictures when the blues started to come down pretty bad, horrible purple. Did you do any surgery to put that back?

G.M: Getting a good repair was important to me, so I went to the Texas Rangers and Dr. Kevin Meister was able to get me in within a week. I had a week of unrepaired bicep and a lot of bleeding.

The doctors had decided that the repair was gonna be a reattachment. However, after I woke up from the surgery they informed me that my situation was worse than they thought. My bicep tendon actually exploded.

Y.D: That is crazy. Wow. I never knew that this was the secret for your biceps. When were you able to train again?

G.M: First,  I was put into a brace for 14 weeks. After that, I could start lightly using the arm again. But within a month after the surgery,  I was able to start training the rest of my body, which was a big part of my successful recovery.

Y.D: What was the impact from this injury on your mental health?

G.M: The biggest mental stress for me was that the injury  happened when I just started gaining success in competing. The only reason I did a powerlifting meet was to make me a better bodybuilder. I was trying to gain size. I had just won my first overall and I was already thinking about national level competing, and then my bicep tore.

I’ve seen many bad bicep repairs, so I was questioning whether I will be a good athlete. My biggest fear was that it would impact my goals as a bodybuilder.

Y.D: The Heart of Texas was your comeback show in 2011. What do you think about your performance there?

G.M: I tore my bicep in February and I was competing and winning again in September. So, I think I did well. I got second place at that show in the light heavyweight class. I was really happy with it.

When I got hurt  I was still very dedicated to my training. I still trained all three body parts and I essentially went into a prep style diet. I knew that I couldn’t work on gaining size, while recovering, so dieted hard to be in a lean shape.

When the summer came and I was able to start training heavy, I increased the calories, so I can build muscle mass again.

Y.D: Were you concerned when you were training only one side of your upper body, while the other one is still not functional?

G.M: I knew that I wouldn’t improve the other sides of my body while I was hurt  because my training wouldn’t be as good as before. I was training to maintain the work of the other limbs.

Training is so good for your body in general. While I didn’t work directly on my left upper body, it still recovered faster because I was working out.. All the benefits that you get from training, such as stimulation, circulation and favorable hormonal environment, still applied to that arm, even though it wasn’t getting direct work. I believe this is why I was able to recover so fast.

There is always a way to overcome whatever happens to you and come back stronger. Strong will and dedication are the key to accomplishing your goals.

If you want to listen to the full podcast, you can do it on Apple, Spotify, and YouTube.

For more information about Greg McCoy,  check out his Facebook page, YouTube channel, or come for a visit at Hidden Gym.