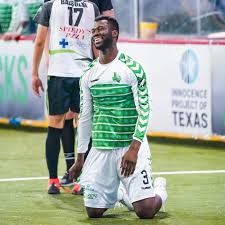 In the fifteenth episode of the podcast of Dallas Sidekicks, host Scott Wegener talks with veteran defender Myke Jones. He has played in the NPSL, in the MSL, in the MLS, and in the legendary amateur club North Texas Rios, and took part in a number of US Open cups.

Myke shares his knowledge and experience as a trainer at Hidden Gym, which is the official gym of Dallas Sidekicks.

Scott and Myke go through many different topics in their conversation, circling around positivity, soccer and the Central Cup Tournament.

S.W: You have an interesting instagram page. One of the things that I really appreciate about it is that you seem to have a never ending string of positivity in a world that can be so negative. Is that just the nature of who you are?

M.J: I noticed that the environment I allowed myself to be around was unbalanced, full of positivity and negativity at the same time.  Now, I’ve gotten rid of anything negative  that does not make me feel good.

I like to connect to everything that’s nature related, organic and positive. That’s what keeps me going every morning and every night.

S.W: Speaking of the mornings and your Insta page, one of the other things I noticed is that you work out in unusual hours. Most of the people go to the gym after work or during their lunch break but you’re at the gym at 3am. Why are you getting up so early?

M.J: When I go to the gym at this time there is nobody and this is really cool.I know it sounds crazy to work out at 3 – 4 am but it makes me sane and I have  the rest of the day ahead of me. I’ve even trained some people who want to get trained in the morning before they go to work and brush up. Training so early became a lifestyle and it works great for me.

S.W: One of these days I’m gonna join you for an early morning  workout at Hidden Gym. It’s right around the corner from our office here in town and it’s such a nice place to train. I love that Hidden Gym is the official gym at Dallas Sidekicks and how friendly it is. It has a very different vibe as a gym. Everybody that I’ve talked to there is so cool and sociable.

M.J: Yes, it is an amazing place to train and coach. You are very welcome to join me!

S.W: I once asked you who was the best, most famous player that you ever played with. You told me it was Thierry Henry. You played with him at the Red Bulls. What was it like playing with a guy who was an international superstar and had played in World Cups?

M.J: He is an absolute legend. Every training session, he always expected the best out of you, and when you didn’t get that he would call you out and everybody else out.

The experience with him was life changing. This guy has taught me so much about life, about the game, how to play it, and how to approach it.

S.W: I gotta say this is so cool. It’s great to hear that a guy with that kind of star power didn’t just come in and collect a paycheck from the MLS. He came in and practiced, and expected you to be on the same level that he was. I find that very admirable.

M.J: Yes, it is. There is so much about him that makes you want to get better.

S.W: I want to talk about your time with North Texas Rios. So, legendary “amateur” club, right? I say amateur and air quotes, because most of you guys that are on that team have played professionally somewhere at some point.

What was it like to be one of the premier amateur teams in all of the country?

M.J: It’s been a great experience. Honestly, I didn’t really expect to get the chance to play with them at first.

This was my seventh year in this team and we’ve been through so much together. Shout out to the head coach Tito who makes sure that we’re all grounded. We’re thankful for being a part of something bigger than just just the team. It’s like setting a family. We’ve been able to do some extraordinary things consistently.

Before I let you go, we’ll circle back to the Sidekicks now and talk about the season. I think that the Central Cup went really well. You guys had a tough loss in the first game against Kansas City and got second place.

What was it to finally get back out there in the Central Cup and play after all this time off?

M.J: The tournament was awesome. Shout out to the league for getting everything together.

You know that I usually consider second place a loss but at the end of the day, the bigger picture was the most important thing. We got our chemistry as a team, we found what we needed to do, we found what our weaknesses were, what our strong points were.

I know how hard we worked for this, so I am looking forward to the next game. We are blessed to have the opportunity to play again.

If you want to watch the full episode of Sidekicks Direct and hear the whole conversation, you can do this here.

Do you want to work out at the official gym of Dallas Sidekicks? Do you want to be trained by Myke Jones and other experienced professionals? If yes, you are more than welcome to visit us at Hidden Gym!